Artist Louis Wain is well-known, in part, for painting a series of cat images, as he gradually lost his sanity. I would like to spend a few moments looking at two of them. 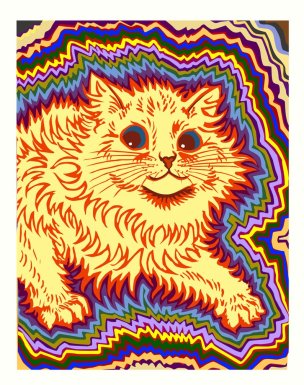 The first and earlier image still bears a good resemblance to what we think of as a cat. It has a cartoon-ish quality, though, and it is unusual to see what appear to be emanations from the animal– these lines of energetic colors.

To me, the energy lines are partly aesthetic, but mainly I would suggest that they connote an unusual idea or set of ideas about the cat. There is a wild, frightening quality about the cat (according to Wain), and he is trying to capture this.

The colors, too– they are quite unique. An unusual combination of tones. I could only describe their effect as creating uneasiness. These are not the gentle, harmonic color tones of a Monet, that is for certain. 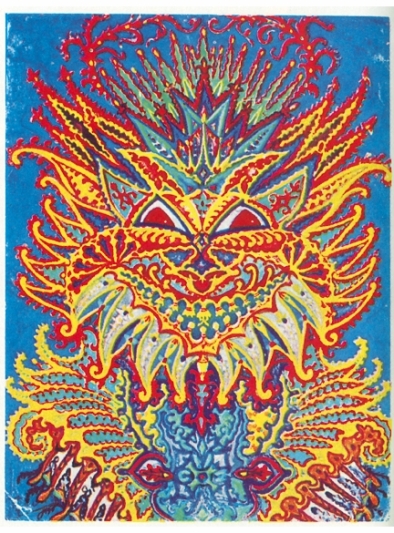 The second image shows a movement into the more abstract, and even psychedelic. More than anything I can think of, it resembles a 1970’s album cover.

The image barely connotes a cat. It has devolved into a series of patterns, and these display a stomach-churning symmetry. The cat is no longer a familiar pet– it is an amalgamation of barely organic forces. It is more as though we are seeing the family cat without its skin– forced to look at its organs.

Perhaps it is clearest to say that the second cat has become abstracted to a degree that is unnatural.

That may be the point to be observed– that schizophrenia may not involve a lack of abstraction, but rather the existence of a particular kind of unwholesome, redundant, disquieting abstraction.

I can’t help but to think of the harsh, high-pitched fractal ambient pieces I composed when I first became schizophrenic– and the effect they had on my family, when they heard them.

I can’t offer a remedy for this kind of abstraction. Maybe if Wain had spent more time petting the cat than depicting it, he might have reached a more comfortable state of mind.

Sole member of Mystified and Mister Vapor. View all posts by mystified13

Those curious can find more about Thomas Park at his main artistic hub: Benchmark: Hub